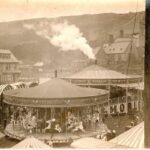 18th April 2020 is a special day for Pateley Bridge – the home town of Nidderdale Museum. It was the 700th Anniversary of the granting of its Market and Fair Charter.  It was on 18th April in 1320 that King Edward II granted a charter to William de Melton, the Archbishop of York, who was lord of the manor, to hold a weekly market and an annual fair at his manor of Patheleybrigge in Neddredale.  This was to compensate the Archbishop for loss of rent caused by the Scottish raiders heading south, sacking Fountain’s Abbey and destroying homes and crops. He could charge people coming to the area for the events, take rents for stalls and pitches, and levy a tax on profits.

The market was originally granted for Tuesdays, before being changed to Saturdays and then dying out in the 20th Century. The fair was a much larger event, lasting five days and tradesmen brought goods which were not easily available locally – better fabrics and leather goods, crockery, spices, dried fruit and livestock. It was associated with the Feast of the Nativity of St Mary (the local church) and it was held on 3 days before the Feast Day, the actual day and the morrow. The original Saint’s Day was on 8th September, but due to calendar re-organisation in the 18th Century, the date changed to the first Sunday after 17th September. Thus The Nidderdale Show, run by The Nidderdale Agricultural Society, which is now Pateley’s ‘annual fair’ is held on the first Monday after the first Sunday after 17th of September (on 21st September this year). In 2020, The Society is marking its own 125th Anniversary.

Museum volunteers are researching information so that an exhibition covering the 700 years can be mounted later this year or in 2021. We are sure that purists will forgive it being celebrated a year late in the current circumstances.   Watch out for further details once this crisis is over.

With thanks to Eileen Burgess and her booklet Nidderdale Feasts and Festivals, to The Nidderdale Show website and to Dayne Swires for the photo of the Fair on Feast Field circa 1900.

Please fill in the form below and we will get back to you shortly.